A baked pie of Italian origin consisting of a shallow breadlike crust covered with seasoned tomato sauce,cheese,and often other toppings,such as sausage or olives.

Do oil surface first, and then fried stuffed (tastes with you), and then sown on the oil filling, stuffing cheese went on to cover the lid on, with a small fire to fry mianp
First, And face. Put cold water and slowly release, or put more on and into a thin surface. Side of the drain, while stirring, into a melting capacity of a good package cheese, a pinch of salt. Well, bunched up into two groups face, 30 minutes, then knead for a while, so that side tire chewy.
Then, Brush the grill plate on a layer of melted butter into the dough, press out the shapes, doused with tomato sauce, sprinkle made of silk cheese. Covered with a variety of meat and sausage, sprinkle with chopped vegetables in the, Finally, holes and a layer of chee,
Finaly,170 degrees, 5 minutes, then change the lit 3 minutes OK, pizza oven to be placed in the middle. Also keep in mind Oh, making use of microwave oven pizza, best crust not too thick, so as not cooked too dry or cooking does not affect the taste through. In addition, as fear of a bad fire and time to master, the best graded heating, observed at any time, to avoid burned

Pizza的由来（英文版） History of Pizza Pizza:The Soul of Italy There are not too many nations that can say their national dish has become an international phenomenon.Italy has two such dishes,pasta and of course pizza.In America pizza usually falls into two categories:thick and cheesy Chicago style or thin and more traditional New York pizza.In Italy pizza also falls into two distinct categories:Italian pizza and the rest of the world.It might seem silly considering the basic ingredients,but one taste of a true Italian pizza and that"s it.You will never feel the same about this simple and delicious food again.Pizza in its most basic form as a seasoned flatbread has a long history in the Mediterranean.Several cultures including the Greeks and Phoenicians ate a flatbread made from flour and water.The dough would be cooked by placing on a hot stone and then seasoned with herbs.The Greeks called this early pizza plankuntos and it was basically used as an edible plate when eating stews or thick broth.It was not yet what we would call pizza today but it was very much like modern focaccia.These early pizzas were eaten from Rome to Egypt to Babylon and were praised by the ancient historians Herodotus and Cato the Elder.The word "pizza" is thought to have come from the Latin word pinsa,meaning flatbread (although there is much debate about the origin of the word).A legend suggests that Roman soldiers gained a taste for Jewish Matzoth while stationed in Roman occupied Palestine and developed a similar food after returning home.However a recent archeological discovery has found a preserved Bronze Age pizza in the Veneto region.By the Middle Ages these early pizzas started to take on a more modern look and taste.The peasantry of the time used what few ingredients they could get their hands on to produce the modern pizza dough and topped it with olive oil and herbs.The introduction of the Indian Water Buffalo gave pizza another dimension with the production of mozzarella cheese.Even today,the use of fresh mozzarella di buffalo in Italian pizza cannot be substituted.While other cheeses have made their way onto pizza (usually in conjunction with fresh mozzarella),no Italian Pizzeria would ever use the dried shredded type used on so many American pizzas.Pizza一词源于拉丁文的pinsa(flatbread,中文叫面饼大概比较适合),很早以前的Pizza往往就是在flatbread上加上橄榄油 和香料.【披萨英文】

英语翻译
The tower of Pisa was built to be the most beautiful bell tower in all of Italy.It is the bell tower for Pisa Cathedral.However,not only is the marble tower beautiful,it is perhaps the strangest tower in the world.lt leans to one side and looks like it is going to fall over.The building of the tower began in August 1173 and took nearly tow hundred years to complete.Nobody is certain who designed the tower,but for many years it said that Bonanno Piisano was the architect,ln 1319,all the floors were finished and years laters,work eventuallybegan on the bell chamber at the top.lt wasofficially opened after nearly 200 years of construction.The tower has eight floors.lt is 54.5 metrestall with 294 steps up to the bell chanber.From the top,there is a very beautiful view.ltalian scientist,Galileo ,once did his famous experiments about gravity and falling objects from the top of the tower.Why does the towerlean?ln fact,it was already while they are building it.As soon as three floors had been built,bu 1178,it began to lean as the ground beneath it sank.The builders tried to make the tower straight again as they adde more floors,but the lean only go worse as the tower grew.lt cotined to lean by about 1 millimetre every year until finally,on 7 January 1990,it was closed to the public,For ten pears,the rescue of the tower was a serious problem.The top was leaning over by 5metres to the south and if its movement was not stopped,the tower would one day fall over.Measurements taken in 1911 estimated that the tower would collapse by 2050,if not sooner.After 10 years of hard work,it was officially reopened on16 June 2001.However,it was not opened to the public until the end of 2001 and even now,the number of visitors is restricted.lt is now safe for the next 300years because engineers have reduced the lean by 50 centimetres to give it the same lean that it had in 1838.

英文维基百科：（百度不让发维 基 百 科的网址,说是有广告,晕死!辛苦楼主去掉参考资料网址中的中文就行了.
Pizza in Brazil
Pizza is a very popular dish in Brazil,brought by Italian immigrants to that country.The best pizzerie are found in Sao Paulo,a city that calls itself "The Pizza Capital of the World",hosting more than 6000 pizza establishments[3] and where more than 1.4 million pizzas are consumed every day.[4] It is said that the first Brazilian pizzas were baked in the Bras district of São Paulo in the early part of the 20th century.Until the 1950s,they were only found in the Italian communities.Since then,pizza became increasingly popular with the rest of the population.The most traditional pizzeria are still found in the Italian neighborhoods,such as the Bexiga/Bela Vista.Many say that the Brazilian pizza is the best outside Italy.Typically,pizzas follow the Neapolitan variety,rather than the Roman one,being thicker and more doughy.
Pizza in Australia
Pizza is popular in Australia,where a significant percentage of the population is of Italian descent.[5] The usual Italian varieties are available,but there is also the Australian,or australiana,which has the usual tomato sauce base and mozzarella cheese with bacon and egg (seen as quintessentially Australian breakfast fare).Prawns are also sometimes used on this style of pizza.
In the 1980s Australian pizza shops and restaurants began selling gourmet pizzas,essentially pizzas with upmarket ingredients such as salmon,dill,bocconcini,tiger prawns,and even such outré toppings as kangaroo,emu and crocodile meats.Wood-fired pizzas,cooked in an impressive-looking ceramic oven heated by wood fuel,are also popular.
Pizza in India
Pizza is a fast emerging fast food in Indian urban areas.With the arrival of pizza brands like Pizza Hut,Domino"s and Smoking Joe"s etc,Pizza has reached to many cities in India.Pizza is becoming extremely popular among youth in India.[citation needed]
Pizza outlets serve pizzas with several Indian based toppings like Tandoori Chicken and inclusion of Cottage Cheese (Known as Paneer in India).Indian pizzas are generally made more spicy as compared to their western counterparts,to suit Indian taste.Along with Indian variations,more conventional pizzas are also eaten.[

Pizza is made with an oven-baked,flat,generally round bread that is oftencovered with tomatoes or a tomato-based sauce and cheese.Othertoppings are added according to region,culture,or personal preference.
Preheat your oven to about 180c or 350F.(C=Celsius F=Fahrenheit.)Buy ready-made pizza bases,.If you have plenty of time,then you can just get dough.Spread tomato paste on your pizza base..Add a sprinkling of cheese.Add any other toppings that you might enjoyPlace your pizza on an oven tray sprayed with olive-oil,so that the pizza doesn"t stick.Put your pizza in the oven,and turn it down to about 160C or 320Fdegrees.#Take it out after about 15 - 25 minutes,depending on youroven.Use your own judgment to tell when the pizza is ready.The cheeseshould be a golden brown,but it should not be burnt. 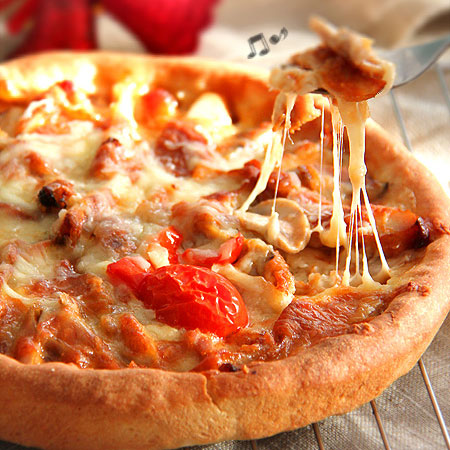